Creeks and rivers are ever-changing dynamic systems. They change moment to moment and can have various characteristics, each distinct from the next. To further complicate the matter, the San Antonio River Basin is made up of a complex arrangement of creeks and rivers and their corresponding watersheds. How then does one go about defining what is “healthy” and what are the thresholds to determine how much stress these complex systems can take before they are deemed too “unhealthy” – that is the challenge in coming up with a viable and meaningful river basin report card.

The overall grade for the 2022 San Antonio River Basin Report Card is B, which is the same as as the last two years. This grade is the average of twelve individual indicator grades. The overall score for this year is 1-point higher than last year; however, the slight increase in score is not enough to raise the grade.

The San Antonio River Basin is one of 23 major basins in the State of Texas. It carries surface water from 2,500-foot elevations within the Texas Hill Country to less than 50-foot elevations near the Gulf Coast. It drains nearly 4,200 square miles, including parts of Atascosa, Bandera, Bexar, Comal, Dewitt, Goliad, Guadalupe, Karnes, Kendall, Kerr, Medina, Refugio, Victoria, and Wilson counties. To learn more about the River Authority, visit our About page. Experience the San Antonio River Basin by taking a virtual tour! 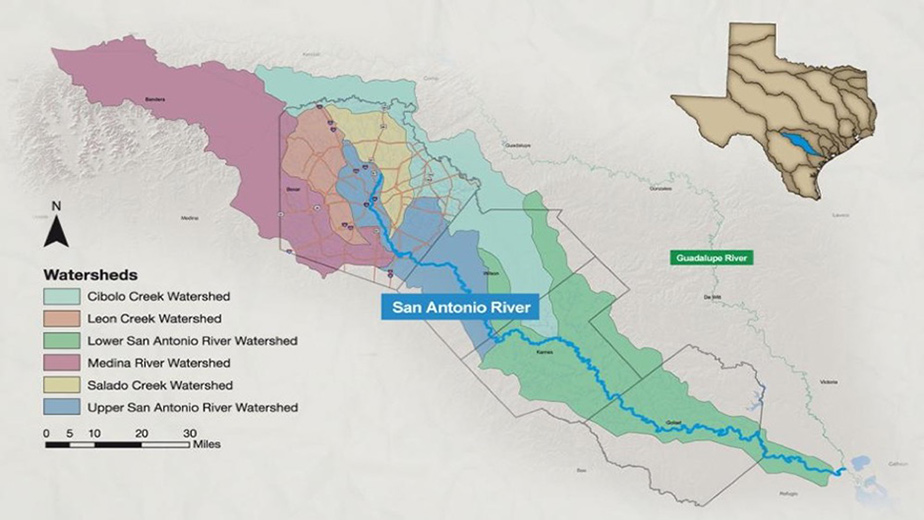 The expert engineers, scientists, technical, and specialized staff of the River Authority exercised their best professional judgment to determine the most meaningful list of indicators for this river basin report card. To help tell the very diverse and complicated story of the San Antonio River Basin in a simple, easy-to-understand way, the River Authority selected twelve indicators that were based on observations of basin health and comprised of accessible and defensible data which could be easily explained to the laymen public. The primary driver for the selection of the twelve indicators was to tell a clear and meaningful story about the health of the San Antonio River Basin. Where feasible, indicators use standards or guidelines established by State or Federal regulatory agencies, such as the Texas Commission on Environmental Quality and the Environmental Protection Agency. The River Authority’s mission of being committed to safe, clean, enjoyable creeks and rivers was also a driver in the indicator selection process.

The “Indicators and Grades” section of the 2022 San Antonio River Basin Report Card will provide a summary of each indicator including why each indicator is important to the health of the San Antonio River Basin and how it is being measured. In addition to the summary, an explanation of the grade will also be given for each indicator along with key findings and recommended actions that could be implemented to improve the grade, including specific examples of ways individual citizens may help improve the health of the river basin. Many of the indicators are grading data gathered during the River Authority’s Fiscal Year 2022, which ran from July 1, 2021 to June 30, 2022. However, some indicators may grade a larger set of data covering multiple years. The write-up for each indicator will clearly state the period being measured and will include links to sources of data and other valuable information. Please also note the term metric and indicator are used interchangeably in the basin report card.

As previously mentioned, it is a difficult task to come up with indicators for a river basin report card. While River Authority staff exercised their best professional judgment to determine the most meaningful list of indicators for this river basin report card, we acknowledge that data can often be interpreted in different ways. Therefore, we will include in the indicator write-ups any potential shortfalls that we recognized in the development of the metrics. We believe it is appropriate to openly acknowledging potential challenges in the interpretation of data. This transparency may lead to future public discussions about the metrics and possibly to improvements in the basin report card methodology. This, in our opinion, will only serve to make the San Antonio River Basin Report Card even more viable and meaningful.

The 12 metrics being graded in the San Antonio River Basin Report Card include a diverse set of measurements with each scoring a different type of unit. Results of each metric are standardized against a common scale of 0-100 to overcome difficulties associated with comparing indicators with different measurement scales and units. Sometimes this conversion is straight-forward; sometimes it can be challenging. An effort has been made in the write-up information for each metric to clearly explain where the data is coming from and how that data is being used to calculate a standardized 0-100 grade.

For this river basin report card, the standard one-hundred-point scale is divided into five equal parts where an “A” equates to 100-80 (Excellent); B is 79.9-60 (Good); C is 59.9-40 (Moderate); D is 39.9-20 (Poor); and an F is 19.9-0 (Failing). The reason for the broader spread in scores is that this scale is more sensitive to, and reflective of, changes in river basin conditions. The larger spread in scores also allows for an easier way to include a plus and minus scale where the upper 5 points of the 20-point range is a plus score and the lower 5 points of the 20-point range is a minus score. The “F” score, however, does not have a plus or minus.

The dashboard for this basin report card will simply show the standard letter grade, including + or – where applicable. The letter grade and the numeric score will both be provided in the write-up information for each individual metric.

Some of the indicators in this basin report card are essentially a trend analysis scoring Fiscal Year 2021-22 (July 1, 2021 through June 30, 2022) data against an average of up to five fiscal years of previous data. It is possible for these trend analysis metrics to have a final numeric score above 100 or below 0. The write-ups for these indicators will clearly identify them as a trend analysis and remind readers of the potential for scores to be above or below the standard 0- to 100-point scale. If a final score is above 100, the grade will be shown as an “A+” on the report card dashboard, and a final score below 0 will be shown as a “F” grade on the dashboard. The final numeric score of all twelve indicators will be averaged to produce the overall basin grade.

The 2022 San Antonio River Basin Report Card is being issued in September to correspond with World Rivers Day, which is the last Sunday in September. With each annual basin report card, the grades for the indicators will show trends that will be highlighted over time. Together, we can achieve and maintain good grades and focus our collective community attention on improving areas that are scoring low.

It is a complicated task coming up with a river basin report card. The challenge is determining the metrics that have viable data, are simple to explain, and are repeatable year after year in order to show trends. Then there are the important issues that need to be included but have not been measured for one reason or another – or maybe they are one-off occurrences that are significant enough to mention. There certainly were some important issues that unfolded during our Fiscal Year 2021-22 (i.e. July 1, 2021 to June 30, 2022). For that reason, we added this final section to the San Antonio River Basin Report Card to capture the top noteworthy bits of information that we did not apply a grade to, but nevertheless, believe are important to mention.

River Authority staff are constantly on the lookout for non-native invasive species and will take appropriate actions to help control their spread. For example, when the San Antonio River Walk is drained for maintenance – which happens every few years – River Authority staff typically find and remove two non-native invasive fish species: Plecostomus and tilapia. The Plecostomus is a suckermouth catfish, which is a tropical fish from the armored catfish family. Tilapia is a fish native to Africa and is part of the cichlid family. These two non-native invasive fish species have long been a nuisance in the River Walk and other sections of the San Antonio River. 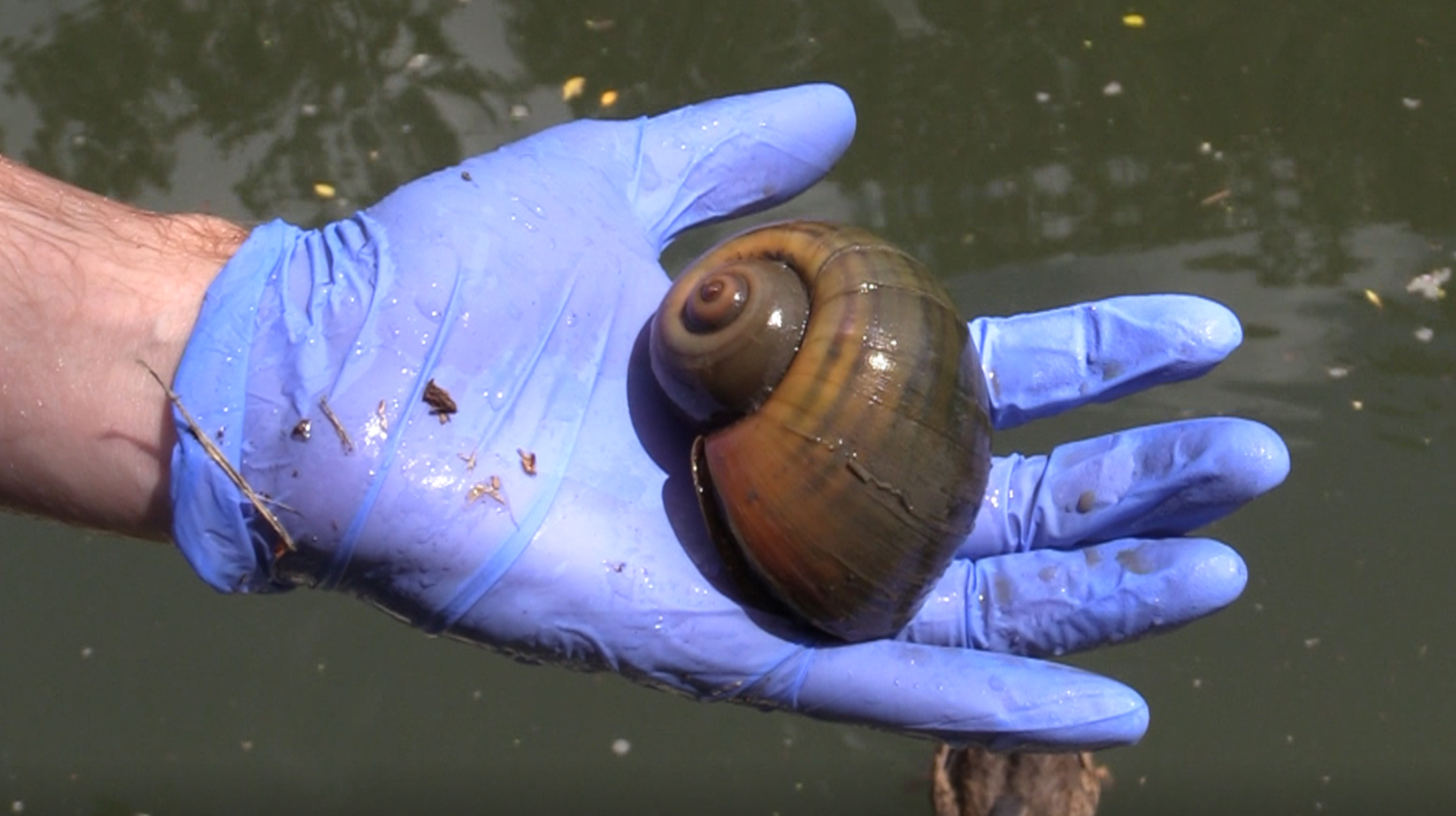 Unfortunately, a new non-native invasive species, the Apple Snail, was discovered in the River Walk in October 2019. A native of South America, these snails can grow to 6 inches and their presence is often indicated by the bright pink egg sacks that can contain thousands of individual eggs. Apple Snails continue to be a threat and River Authority staff and River Warrior volunteers regularly remove these invaders. Please sign up to be a River Warrior if you’re interested in joining this fight.

How did the Apple Snail get into the San Antonio River, you may ask? These aquatic species are found in many home aquariums. So, it is most likely that these non-native invasive species, similar to the Plecostomus, have been introduced into our basin by people who have illegally dumped their fish tanks into the river. Citizens are encouraged to help stop the spread of non-native invasive aquatic species by never dumping aquarium contents in a Texas river, lake, or natural body of water.

There are other non-native invasive species to consider as well. Zebra mussels, for example, can multiply rapidly, and infested streams and lakes have reported colonies of zebra mussels taking over habitats and nutrients from native fish and mussel colonies. This past year, zebra mussels were identified in Medina Lake, which is within the San Antonio River Basin. Zebra mussels can interfere with recreation and wreak financial havoc on infrastructure, so there is a large concern now that this invasive species is in the basin. Learn how you can slow the spread of zebra mussels here.

A park usage score is one of the metrics of this river basin report card. Last fiscal year, the River Authority opened the Escondido Creek Parkway, expanded the Goliad Paddling Trail, and added the North American Friendship Garden to Confluence Park.

Shortly after President Biden took office in January 2021, he moved quickly to place environmental justice at center of sweeping climate plan. The Administration’s move to focus on environmental justice issues helped advance the Westside Creeks Restoration Project as the project was recognized in the President’s Budget in June 2021. Read about the upcoming plans for the Westside Creek Restoration project under News Releases.