Why does it flood?

We live in a region known as Flash Flood Alley. It stretches from Del Rio in southwest Texas, east to San Antonio and follows the IH-35 corridor north through the Dallas-Fort Worth metroplex. Heavy rainfall and drainage off this landscape, also known as the Balcones Escarpment, combine to make this part of Texas one of the most flood-prone regions in North America.

1790: The de la Garza House constructed near San Pedro Creek. The structure is believed to have been one of the oldest residences left standing in the city and is listed on the NRHP.

1851: City Council takes official action to reserve a clearly defined area for San Pedro Springs Park. The San Antonio Daily Ledger reported: A public square embracing an extent of fifty acres, has been set apart, above our town. From the heart of this square, leap forth, from God’s alembic, the clear waters of San Pedro.

September 9, 1921: San Antonio historic flood kills 51 people and causes $3.7 million dollars in damages (over $52.1 million in 2017 dollars). The 7.38 inches officially recorded in San Antonio combined with amounts twice as heavy from higher ground to the north, sent a massive surge of water down the San Antonio River. All but four of the deaths occurred along the San Pedro and Alazán creeks.

1926: June 28, 1929: Young architect, Robert H. H. Hugman, presents his plan for “The Shops of Romula and Aragon” to Mayor Chambers, two City Commissioners, property owners and civic leaders. The proposal endorses the bypass channel and recommends floodgates at the north end, a small dam at the south end and a tainter gate in the channel to check the flow and create pools of water. The Depression prevents any construction other than the bypass channel that was begun in 1926 and completed in 1930.

1935: Following a storm, the Olmos Dam proved its worth by holding back 20 feet of water.

1946: The San Antonio River and area creeks flood resulting in the loss of four lives.

1954: As a result of the flood of 1946, the U.S. Congress authorized the San Antonio River Channel Improvements Project (SACIP) allowing Bexar County and the San Antonio River Authority (SARA) to enter into a partnership with the U.S. Army Corps of Engineers to improve flood control along 31 miles of the San Antonio River and its tributaries. This involved realignment and channelization of the river system to move flood waters quickly away from urbanized areas. Construction began on the SACIP in 1958.

1959: Nine dams along Calaveras Creek (Bexar County) and eleven along Escondido Creek (Karnes County) were completed and plans were underway for additional dams along Martinez Creek and Salado Creek (both in Bexar County).

The San Antonio River Authority is meeting the challenge head-on with a multi-level approach to flood risk management.

Hover or touch the map below to view the counties in Texas that are part of "Flash Flood Alley." 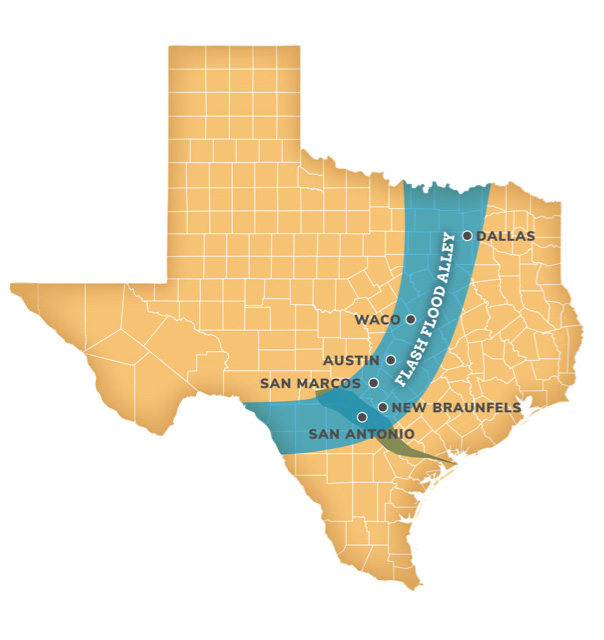 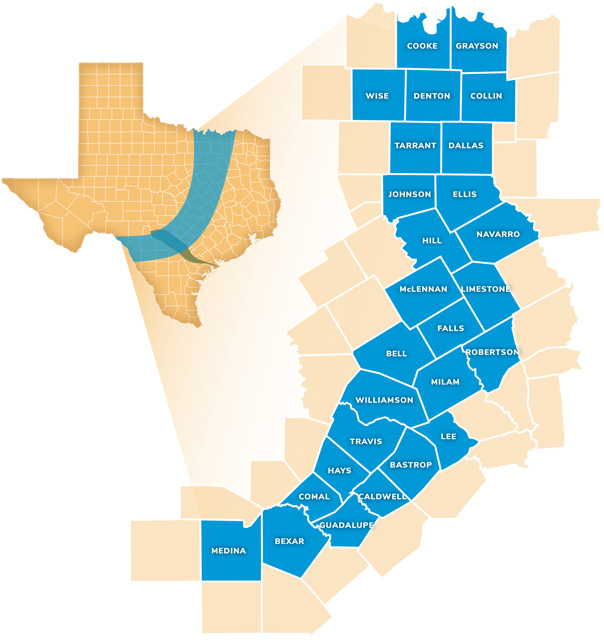