While all the metrics in the San Antonio River Basin Report Card have overlapping correlation to the safe, clean, enjoyable creeks and rivers aspects of the River Authority’s mission, the Whooping Crane Population grade is primarily related to the clean aspect. The Whooping Crane is one of the rarest bird species in North America. It is also the largest, standing tall at up to five feet, with a wingspan of up to 7.5 feet. The Aransas-Wood Buffalo Population (AWBP) is the only remaining wild population of Whooping Cranes. This population of Whooping Cranes migrates from Canada, where it spends the summers, to Aransas National Wildlife Refuge, where it winters in the bays and estuaries near San Antonio Bay. The San Antonio River confluences with the Guadalupe River a little more than 10 miles from the bay where the freshwater inflows of both rivers are important contributors to the health of the bay and estuary system.

Once reduced to near extinction, with as few as 15 cranes in 1941, recovery efforts have expanded this population considerably in recent years. The River Authority engages with numerous partners at the state, local, and federal level to foster understanding that healthy waters upstream, contributes to healthy waters downstream and into the bay and estuary system where the Whooping Cranes rely on a clean habitat for food.

According to the United States Fish and Wildlife Service (FWS) Whooping Crane Recovery Plan, the “ultimate goal is to recover the Whooping Crane and remove it from the lists of Threatened and Endangered Species.” However, the plan also makes clear in several locations that it is “not feasible to establish well-defined objectives and criteria for delisting at this time.” Challenges to establishing delisting objectives and criteria include:

Given the FWS does not yet have well-defined objectives and criteria, there isn’t an existing measurement to grade against for this report card. Therefore, for this metric, we are creating a grade for Whooping Crane population using annual bird counts. FWS completes aerial surveys annually to estimate the abundance of Whooping Cranes in the AWBP. The FWS canceled its 2020-2021 flights to count the AWBP Whooping Cranes due to COVID-19 safety concerns for their pilots. The FWS stated that missing this year’s flights would not have a lasting impact on their survey.

Given the cancelation of the last winter season Whooping Crane count, the River Authority decided to use the most recent annual FWS aerial surveys to score Whooping Crane counts. For this year’s San Antonio River Basin Report Card, the results from the Winter 2020-21 survey, which did not occur due to the pandemic, will be same of the previous 2019-20 data. The assumed 2020-21 count data will be scored against the annual average counts from the five previous winter survey years (2015-16, 2016-2017, 2017-18, 2018-19, and 2019-20). 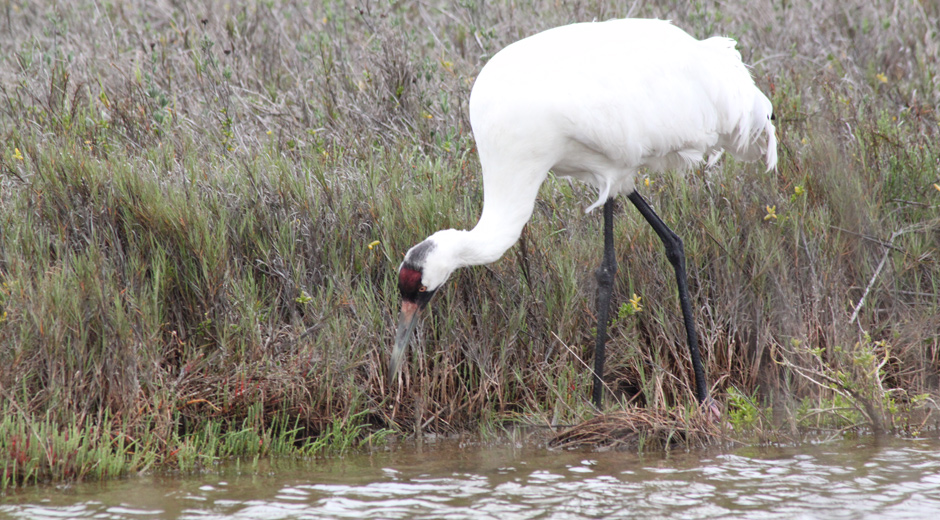 The FWS changed the aerial survey process during the Winter 2015-2016 count so we decided that using data prior to this counting methodology change would be inappropriate. The FWS aerial count methodology changes included using a different type of aircraft and conducting the count later during the winter season. The change from a Cessna aircraft, which was used in the past, to a Kodiak aircraft was made because the Kodiak has better visibility than the Cessna, which improves survey data and results in a more accurate population estimate. The FWS moved the aerial count from December to now taking place in either February or March because the “abundance estimate from December was likely not capturing the entire whooping crane population, given that some birds had not completed migration yet.”

Essentially, the grade is a trend analysis with the basic assumption for the grade being that maintaining and/or increasing Whooping Crane populations year after year is positive (i.e. resulting in a higher grade) and decreasing populations is negative (i.e. resulting in a lower grade). Being a trend analysis, it is possible that this grade may produce scores above 100 or below 0. Scores above 100 will be shown as an “A+” on the report card dashboard and a score below 0 will be shown as a “F.” The actual numeric value will be used in the averaging of all metrics to produce the overall basin grade.

It’s hard to make an accurate trend analysis given the lack of a real Winter 2020-21 FWS survey and the assumption made to repeat the most recent data in this year’s river basin report card. Our hope is FWS will be able to conduct the Winter 2021-21 Whooping Crane count so future report cards will be accurate data rather than assumptions.

There are many ways you can help Whooping Cranes. The first is by supporting the health of the San Antonio River Basin by keeping plastics and other trash out of the river through proper recycling and waste disposal. Plastics and other trash can cause harm to species throughout the basin and impact the health of the species in San Antonio Bay as well. You can see more information related to trash by reviewing the San Antonio River Walk – Mission Reach Trash Collected grade in this basin report card.

One of the best ways to learn about Whooping Cranes is to go see them for yourself. You can learn where Whooping Cranes are currently located by viewing this map, and during the winter months, you can make a trip to the Aransas National Wildlife Refuge to have a chance to see them in-person. The city of Rockport has several private tour boat operations, if you feel more comfortable with a guide. If you happen to see a Whooping Crane, be sure to report your sighting.

You can also plan to attend the annual Whooping Crane Festival or participate in one of the many educational programs offered by the San Antonio Bay Partnership.

Finally, you are encouraged to contact your elected officials and tell them you support funding for the U.S. Fish & Wildlife Service, Environmental Protection Agency, Clean Water Act, The Endangered Species Act and related research, such as the USGS migration and winter ecology of the Aransas-Wood Buffalo Population of Whooping Cranes.