While all the metrics in the San Antonio River Basin Report Card have overlapping correlation to the safe, clean, enjoyable creeks and rivers aspects of the River Authority’s mission, the Public Trash grade is primarily related to the clean and enjoyable aspects.

The River Authority seeks to proactively address the threats to creeks and rivers of trash and floatables. One of our long-term, audacious goals is to achieve trash-free waters in the San Antonio River Basin through education, advocacy, and mitigation projects. Improving the health of creeks and rivers is one the main goals of the River Authority. Since the 1970s, the River Authority’s scientific leadership and targeted efforts have resulted in reducing pollution and trash in our waterways and improving water quality throughout the basin. 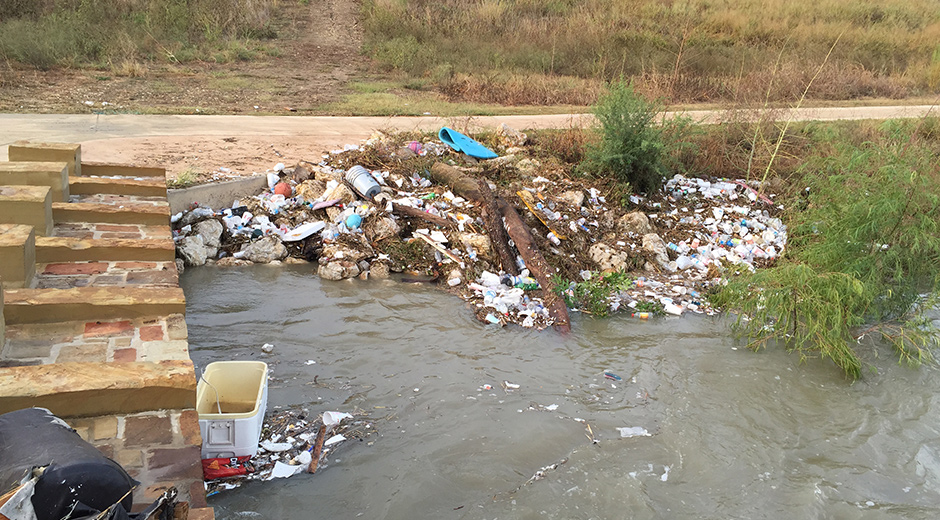 Trash and floatables are unsightly and require extensive costs in hard dollars and labor by the River Authority and other local government agencies along with community volunteers to remove trash by hand. Trash and floatables also have adverse impacts on aquatic and riparian habitats and impede recreational use of local parks and waterways.

The River Authority’s work to mitigate future threats to our waterways is more critical than ever as communities within the basin are growing rapidly – the population in the San Antonio region is anticipated to increase by over 1 million people by 2040. In a region whose history and culture are linked to its natural resources, protecting our creeks and rivers as we grow demonstrates stewardship for these vital resources.

In developing and reporting this metric, we are grading the amount of public trash found on the ground along the San Antonio River Walk – Mission Reach following rain events. Along the 9-mile stretch of the Mission Reach, the River Authority has a goal of picking up all the trash washed into the park during a rain event within 14 days of the rainfall. Trash is picked up to meet this goal by staff from the River Authority’s Watershed & Park Operations Department as well as from our River Warrior volunteers. The River Authority, following rain events that leave a large amount of public trash in the park, also expends financial resources to hire contractors to help with the public trash collection.

The River Authority keeps records of the total pounds of trash collected in the Mission Reach following rain events by staff, volunteers, and contractors. It is this data that will be used for the report card grade. While this report card grade only measures public trash washed into the Mission Reach during rain events, the grade can be used to demonstrate the larger community problem of public trash being washed into area creeks and rivers throughout the San Antonio River Basin, particularly in urban areas.

This grade is calculated by using a rolling 3-year average of pounds of trash collected along the 9-mile stretch of the Mission Reach as a base line. For this year’s basin report card grade, the data for the rolling 3-year average comes from fiscal years 2016-17, 2017-18, and 2018-19. (Note: The River Authority Fiscal Year runs from July 1 to June 30.) The total trash collected this fiscal year (July 1, 2019 – June 30, 2020) is subtracted from the base line, then divided by the base line, and multiplied by 100 to develop a score that determines our A through F grade.

Essentially, the grade is a trend analysis with the basic assumption being that lowering the amount of public trashed washed into the Mission Reach during rain events is positive (i.e. will get a higher grade) and increasing public trash washed into the park during rain events is negative (i.e. will get a lower grade). Being a trend analysis, it is possible that this grade may produce scores above 100 or below 0. Scores above 100 will be shown as an “A+” on the report card dashboard and a score below 0 will be shown as a “F.” The actual numeric value will be used in the averaging of all metrics to produce the overall basin grade.

This indicator will include additional data in future years. The available data for this indicator only allows for a rolling 3-year average for comparison in this year’s basin report card. The intent will be to expand the rolling average into a 5-year span, which will be implemented by the 2022 river basin report card.

The amount of public trash deposited and cleaned-up from the Mission Reach on annual basis reflects how well the community properly disposes of trash. We are using this grade as a surrogate to demonstrate the larger community problem of public trash that can be found throughout the San Antonio River Basin, particularly in urbanized areas.  The 2020 San Antonio River Basin Report Card grade for this metric is an F because more public trash was picked up along the Mission Reach following rain events in Fiscal Year 2019-20 than the previous three-year average.

Therefore, other variables, such as public behavior and attitudes toward trash, must also be a factor in the amount of public trash washed into the Mission Reach during rain events.

Put simply, the main recommendation is, please do not litter! Because every citizen plays a critical role in the health of area creeks and rivers, the River Authority recommends everyone throw trash in appropriate waste receptacles and follow recycling guidelines to properly reduce, reuse, and recycle. You are also encouraged to make sure trash and recycling containers are properly and securely covered and not overloaded as wind and rain can blow waste from the container onto the ground. 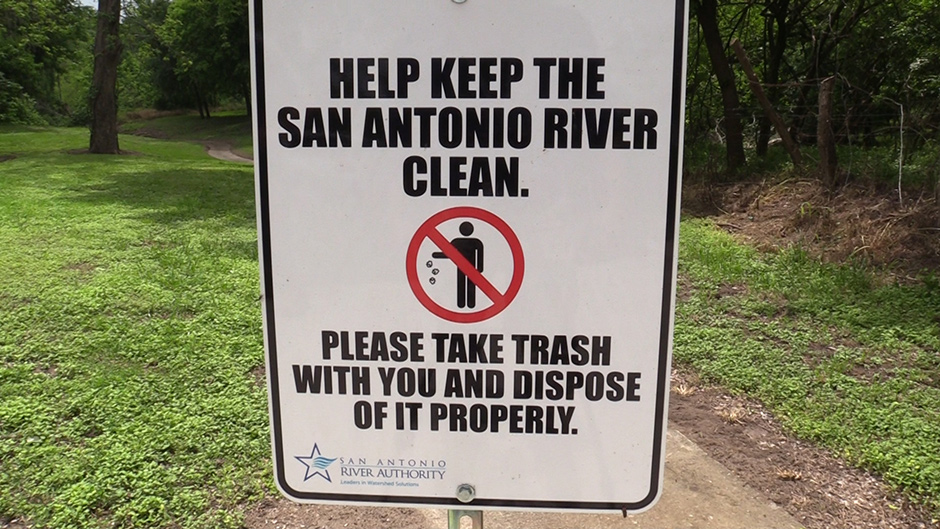 When visiting the Mission Reach (or any other park or green space), please never leave trash or recycling on the ground next to a receptacle. If the container is full, please take your trash or recycling with you until you find an appropriate receptacle to leave your waste or recycling. You are also asked to pick up after your dog when visiting parks and green spaces as pet waste is not only unsightly for other recreational users, but pet waste can also add bacteria pollution to area creeks and rivers when it rains.

The River Authority has a volunteer group, the River Warriors, that assist us with different community service projects such as cleaning up the Mission Reach following significant rain events. The River Warriors are also provided learning opportunities where they can get more information about the River Authority’s commitment to safe, clean, enjoyable creeks and rivers. Sign up here to become a River Warrior. You may also want to participate in the annual Basura Bash clean-up event.