Flooding Flashback – 100th Anniversary of the Big Flood of 1921 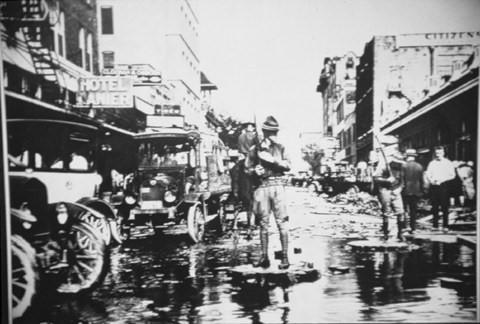 The San Antonio River Basin has a long history of flooding that has shaped how communities prepare for future flood events. In the San Antonio River Basin, particularly in Bexar, Medina, Comal, and Guadalupe counties, steep terrain, shallow soils, and narrow creek and river channels send runoff quickly downhill. The result is deep, fast, and erosive flood waters in a region known as Flash Flood Alley. These destructive forces have the potential to impact communities downstream, threatening lives and property throughout the basin.

Read along as we commemorate the 100th anniversary of the Big Flood of ‘21 and share tools from the San Antonio River Authority (River Authority) that are available to help you prepare and protect your life and property from flooding. 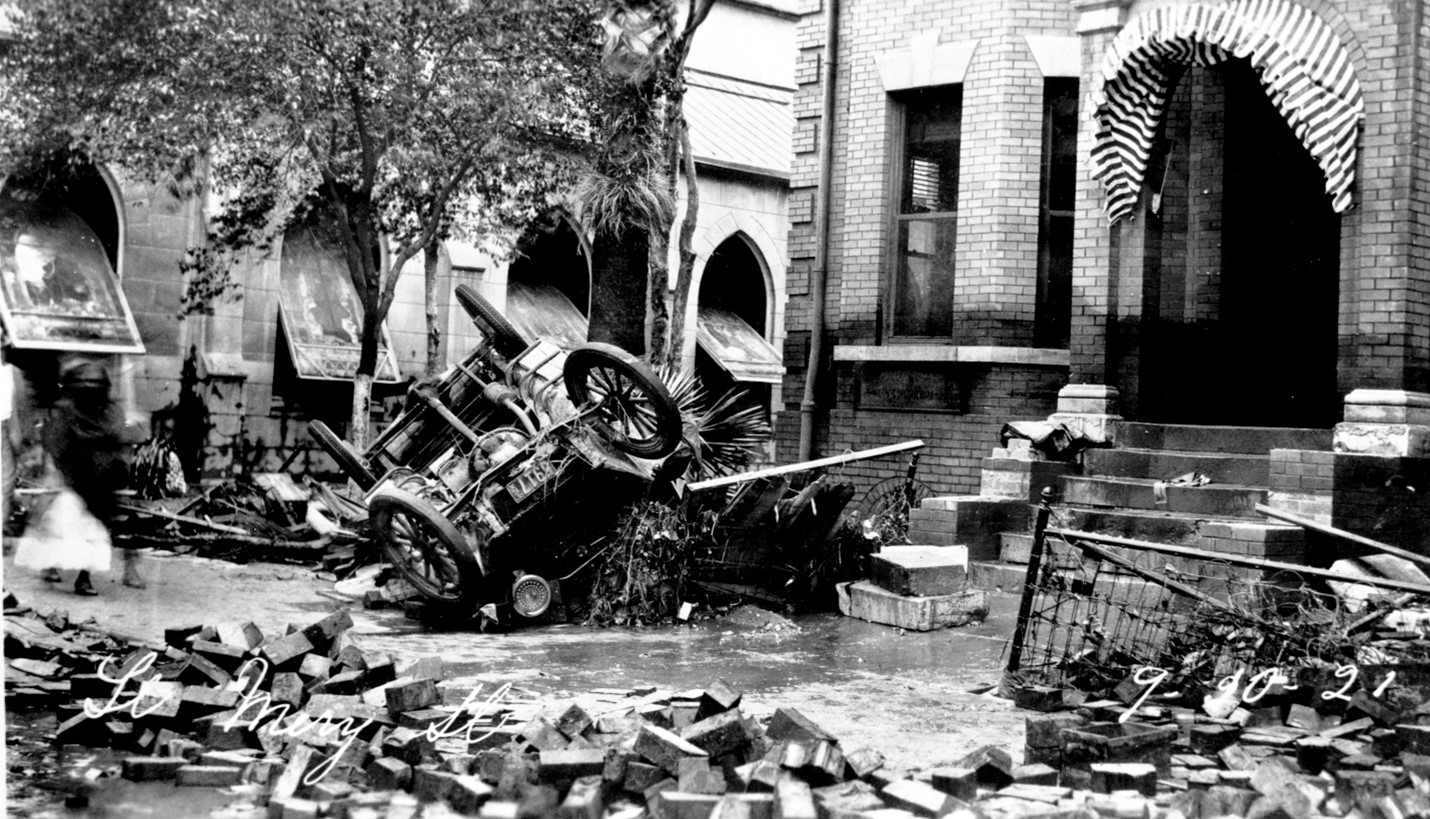 On September 9, 1921, a storm event created from the remnants of a hurricane moved through Central Texas and produced over 7 inches of rainfall in downtown San Antonio and the near west side of the city. North of downtown in the Olmos Creek area, up to 14 inches of rainfall was recorded, which all drained into the San Antonio River and flowed south through the center of the city. The large amount of rainfall in the downtown and west side communities combined with the massive surge of water from the north resulted in a devastating flood event on the San Antonio River and tributaries to the west of downtown.

Damages totaled $3.7 million (over $56 million in 2021). The official death toll counted 51 people who perished during the flood, with most of the fatalities occurring along the San Pedro and Alazán creeks. Sadly, it’s believed that others were lost in the storm who were not reported to officials tallying the final fatality numbers. The community response to this tragic flood event dramatically changed the way the city managed flooding and those engineering solutions are still impacting San Antonio today, 100-years after the devastation brought by the September 1921 flood. 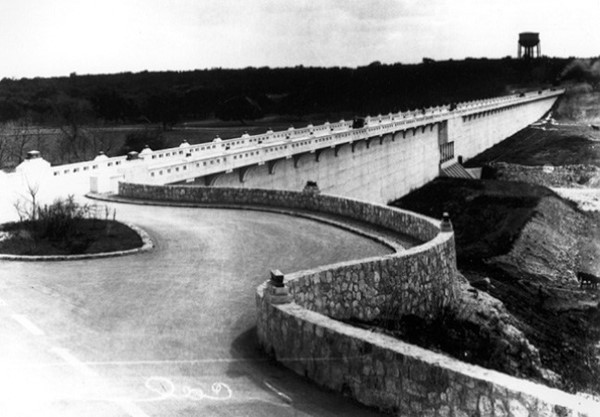 By 1924, construction began on the Olmos Dam north of downtown. The $1.5 million dam (nearly $24 million in 2021) was completed in 1926. In addition to building the Olmos Dam, between 1924 and 1929, the city spent nearly $4 million (close to $64 million in 2021) to clear and straighten many sections of the San Antonio River from Josephine Street north of downtown, which today is part of the Museum Reach near Pearl, to south of downtown where the San Antonio River and San Pedro Creek come together, which today is part of the Mission Reach near Confluence Park. Parts of Alazán and San Pedro creeks were also channelized in the 1920s, and these areas are now part of the Westside Creek Restoration Project, which was recently included in the President’s Budget. The Great Bend cutoff channel in downtown was started in 1926 and completed in 1930 and there is a fascinating story about how San Antonio’s famed River Walk came to be proposed and supported during this period. For history buffs wanting to learn more, Lewis Fisher’s seminal book American Venice The Epic Story of the San Antonio River captures in great detail the devastating flood of 1921 and the River Walk that was birthed from this tragic event.

The River Authority was not yet created when all this work took place in San Antonio. We were created by the Texas Legislature in 1936. However, our creation is tied to the 1921 flood (and floods in 1913 and 1914) as the great storm of 1921 impacted large swaths of Texas, including Austin and Taylor, which set a U.S. record amount of rainfall in 24-hours with over 23 inches of rain (that rainfall record has since been broken). As a result of this horrific flooding, the Texas Legislature created river authorities across the state beginning in the late 1920s and throughout the 1930s. These new special districts, including the San Antonio River Canal and Conservancy District, as we were originally named, were charged with mitigating flood damage on Texas rivers, among many other duties.

How can I learn more about my own flood risk?

For nearly 85 years, since our creation in 1937, cities and counties in the River Authority’s District, as well as the Federal government, have relied on our engineering and technical expertise in flood management and risk reduction. With documented increases in the intensity and destruction of major storms, such as Hurricane Harvey, the most cost-effective way to prepare and respond to the impact of these storms is to ensure that hydraulic and hydrology information, rainfall data, land use changes, floodplain maps, watershed master plans, and capital improvement master plans stay current.

The River Authority has invested considerable resources in developing updated floodplain maps throughout Bexar, Wilson, Karnes, and Goliad counties. This investment, combined with our expertise, has produced some of the highest quality floodplain maps in the United States. Visit our website to assess your home’s flood risk by looking at the Risk MAP Viewer and the River Authority Floodplain Viewer. The Risk MAP tool can be used to help you assess your level of flood risk, including insights such as the level of risk over the life of a 30-year mortgage. The Floodplain Viewer will help you determine if your property is in the 1-percent annual chance floodplain. If your property is in the 1-percent annual chance floodplain (which is also referred to as the base flood or 100-year floodplain), you may be required to obtain flood insurance.

The River Authority has included a grade for community flood insurance participation in the San Antonio River Basin Report Card, and unfortunately, the grade for this metric is a F, which indicates a significant amount of uninsured properties throughout the basin. According to the Federal Emergency Management Agency (FEMA), there is some level of flood risk no matter where you live or work. In fact, about 25% of all flood insurance claims come from areas with minimal flood risk. Therefore, the River Authority supports FEMA’s recommendation for homeowners to participate in the National Flood Insurance Program even if you’re not required by your mortgage company to have flood insurance.

Learn more about the many other ways the River Authority helps protect the communities we serve at our Flood Risk Mitigation page. 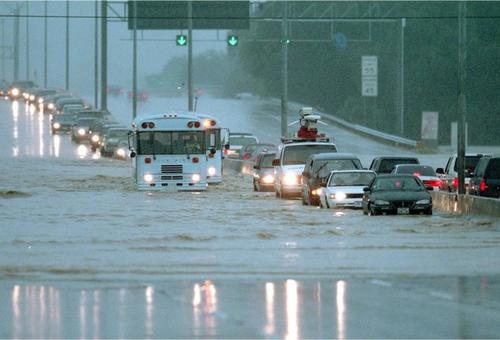 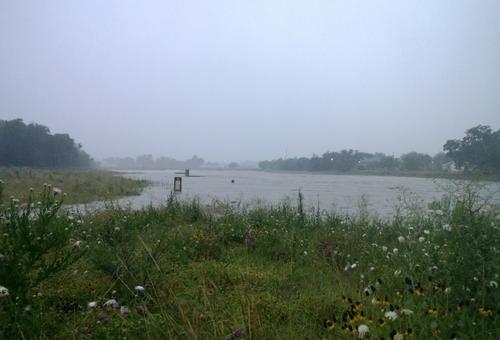 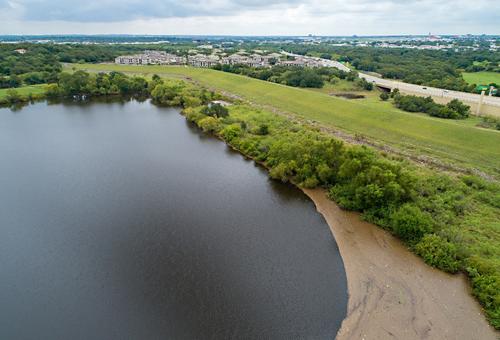