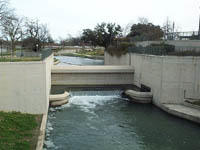 The San Antonio River flood diversion tunnel is approximately 16,200 feet long with precast concrete segmented liners of 24 feet by 4 inches inside diameter. The tunnel starts near Josephine Street where the tunnel inlet shaft is constructed adjacent to the existing channel (See Figure 2 for the tunnel’s route). The inlet shaft is 24 feet by 4 inches in diameter dropping approximately 118 feet to the tunnel invert. The tunnel outlet shaft near Lone Star Boulevard is 35 feet in diameter and contains embedded piping for dewatering facilities.

The tunnel outlet structure is located south of the Southern Pacific Railroad, north of Lone Star Boulevard and west of the river.

Construction for the San Antonio River Tunnel Inlet Structure started in September 1993. The contractor, BRH Garver, constructed a water feature, park facilities, betterments, channelization and tunnel recirculation for the flood control tunnel. A pumphouse was also constructed, mostly below ground level to operate pumps to recirculate tunnel water to supplement river flow during the summer months. This project is a coordinated effort between the U.S. Army Corps of Engineers and the San Antonio River Authority. The Corps bid the project on behalf of the River Authority. Total construction cost was $16.9 million.

Notice to proceed for the San Antonio River Tunnel Outlet Structure was given to Martin K. Eby Construction Company, Inc. on May 5, 1995 and the project was completed in December 1997 at a total cost of $10.1 million. This project includes a water feature, a galvanized steel trellis over a pedestrian plaza, park facilities, betterments, channelization and a gatehouse for tunnel water recirculation. The project was jointly administered by the U.S. Army Corps of Engineers and the San Antonio River Authority.

Approximately 16,330 feet of 24 feet by 4 inches diameter inverted siphon at a depth of approximately 140 feet.

As constructed by the BRH Garver Company, the Inlet structure directs water from the San Antonio River into the tunnel and consists of a 120 foot-long intake ogee weir and apron structure 63 feet long with cast-in-place roof and trash racks. A sloped apron collects water behind ogee weir and then transitions to a 25-foot diameter vertical shaft leading to the 24-foot diameter tunnel. The River Authority is providing landscaping, an aerating water feature, disinfection and recirculation pumps to recirculate the base flow of the San Antonio River for water quality enhancement.

As constructed by the Martin K. Eby Company, the Outlet structure directs discharge from the tunnel shaft to the San Antonio River and measures 230 feet across the front; 50 feet across the rear and 94 feet from front to rear. The outlet consists of cantilevered retaining walls, trash racks and grated roof. The tunnel shaft transitions from a 24-foot diameter shaft up to a 35-foot diameter shaft at the base slab of the outlet. Water features are included to enhance the appearance of the outlet structure.