What is Stream Restoration?

When left in a natural state, streams are capable of performing myriad functions that are of value to humans, and the importance of these functions are the reason that humans have historically been drawn to live near streams and rivers. Right: Example of a natural, functioning stream in south-central Texas (segment of the Medina River)

However, many human activities can intentionally or unintentionally alter the basic physical and ecological structure of a stream, which can ultimately lead to a loss of these functions. When a stream's functions have been compromised relative to its natural potential or historic functions, the stream is considered to be degraded or disturbed.

In its strictest form, stream restoration is defined as the transformation of a degraded stream corridor to its condition prior to human disturbance. But given the large scale degradation of landscape as a result of human activities, permanent return of the landscape to a pre-disturbed level is rarely achieved.

Therefore, a more common definition of stream restoration is to improve physical, chemical and biological functions of a stream system. Physical functions that might be improved are reduction in bank erosion and a self-sustaining water and sediment movement that does not require human intervention (such as dredging). Chemical function improvements might include higher water quality and greater removal of impurities as the water flows through the channel. Augmentations to biological function might be an expansion of habitat for diverse species, such as fish, aquatic insects and other wildlife. 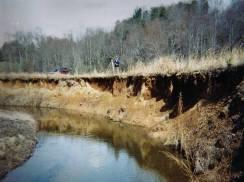 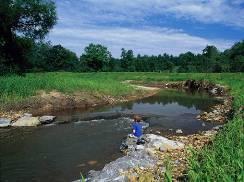