The SARIP was comprised of four distinctive reaches: The Museum Reach, a four-mile segment of the river from Hildebrand Avenue south to Lexington Avenue; the Downtown Reach, a segment of the original River Walk from Lexington Avenue to Houston Street; the Eagleland, a one-mile segment from South Alamo to Lonestar Boulevard; and the Mission Reach, an eight-mile section of the river extending from Lonestar Boulevard south to Loop 410 South.

A concerted community effort to revitalize the river began in 1998 when Bexar County, the City of San Antonio and the River Authority created the San Antonio River Oversight Committee. The 22 civic and neighborhood leaders appointed to the committee were given the responsibility of overseeing the planning, design, project management, construction and funding necessary to complete the project. In addition, the committee was charged with providing an open public forum for citizen input into the project's development. The Oversight Committee was co-chaired by former mayor Lila Cockrell and architect Irby Hightower and an appreciation ceremony took place on November 2014 to commemorate the work of all the committee and sub-committee members throughout its existence.

Benefits of the Project

The main goals of the SARIP were restoring the ecosystems around the river and linking together access to the cultural institutions of San Antonio with a linear park, extended barge access, and improvements to over 15 miles of trails. These enhancements to the river encourage economic development, connect the communities of San Antonio, and provide space for people to enjoy recreational activities such as cycling, jogging, wildlife viewing, and access to paddling the river.

During the 1920s-1960s, the river was channelized to assist in flood mitigation. This helped move water faster through the system, but the removal of native vegetation and river features had negative effects on the wildlife of the San Antonio River.

The SARIP utilized hydraulic modeling of rain events to analyze the amount of native vegetation that could be planted for restoration without interfering with the efficiency of flood water conveyance. The ecosystem restoration was accomplished by rebuilding natural river features and planting native grasses, trees, and plant life near the river’s edge. These native plants provide habitat and food for many species of animals that have historically called the San Antonio River home. Additionally, the roots of these native plants grow much longer than traditional turf grasses found around residential areas. The long roots play an important role in bank stabilization by reaching deep into the soil to prevent erosion. This barrier of grasses and plants also serves as a filter for the stormwater flowing to the river after rain events, catching trash and filtering out pollutants from the runoff. 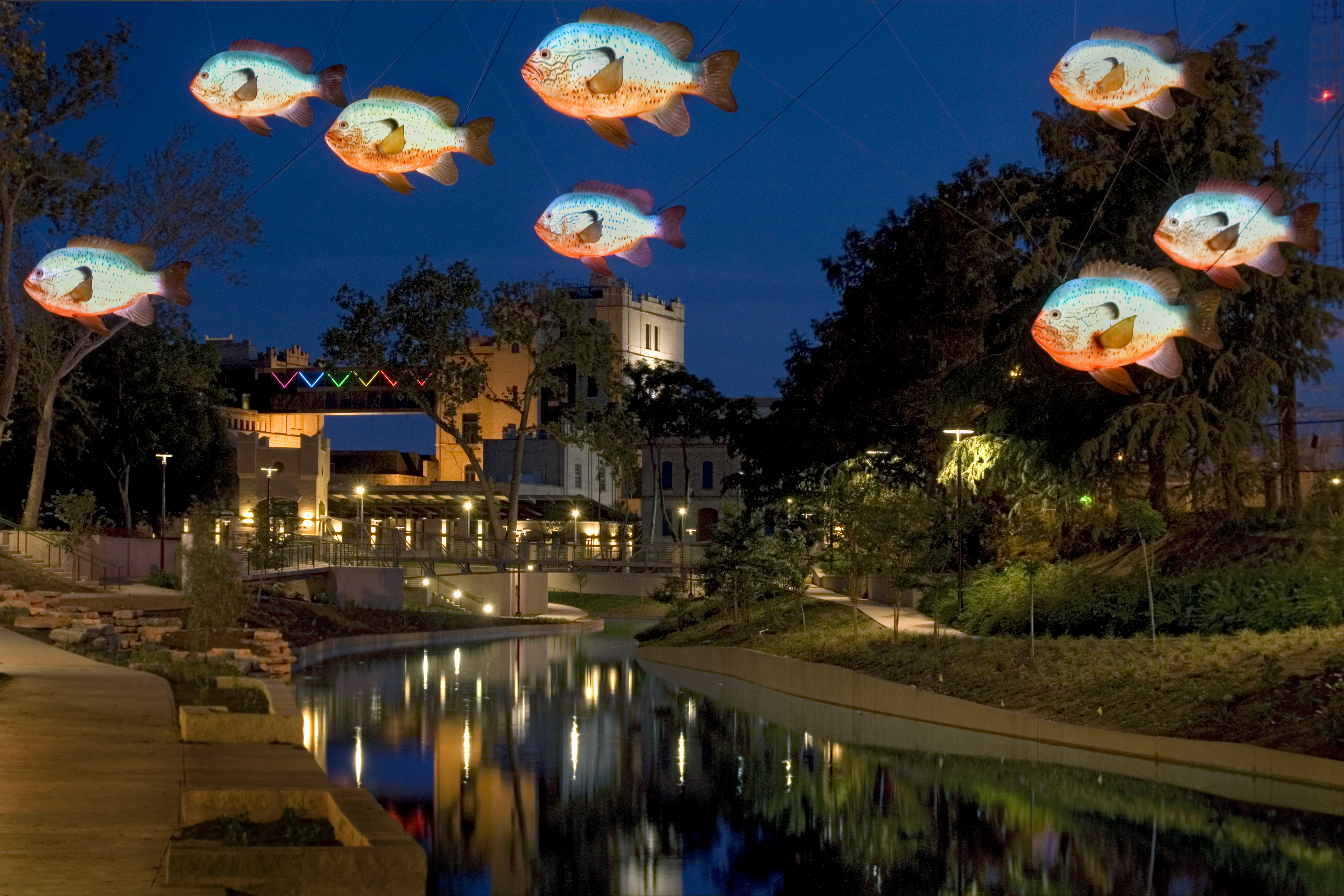 San Antonio's world-renowned River Walk, a top tourist destination in the state of Texas, doubled in length with the opening of the Museum Reach – Urban Segment. The new trails allow people to experience a previously undeveloped section of river north of downtown. Other additions include extended river barge access,landscaping, overlooks, boat landings, lighting, and water features. When added to the original River Walk, the completed project created a linear park through the heart of the city that is over 15 miles in length and is associated with over 2,000 acres of public park land. The new walkways provide easier access to historic parts of San Antonio such as the Museum of Art, the Pearl, the Witte Museum, Brackenridge Park, the San Antonio Zoo, and VFW post 76, the oldest VFW Post in Texas. Public art displays are also visible along the path thanks to donations raised by the San Antonio River Foundation.

The Museum Reach - Park segment includes constructed wetlands and enhancements to Acequia Madre near the Witte Museum, where wildlife can be viewed while walking along the two new pedestrian bridges crossing Brackenridge Park.

Learn more about the history and the 10th Anniversary of the Museum Reach here.

The Eagleland project is located along approximately one mile of the river just south of downtown San Antonio that had previously been channelized to aid in floodwater conveyance. Major components of the project include restoring ecological functions and values to the riparian corridor as well as improving recreational features. The restoration on this segment includes approximately 17 acres of river right-of-way, most of which was planted with native grasses, wildflowers, trees and shrubs beginning in 2006.

The San Antonio River Authority maintains the area through short and long term landscape management techniques to establish a diverse and native plant dominated community. This is a big challenge within the Eagleland Segment primarily because of invasion by non-native plants coming into the area from the existing seed bank as well as upstream and surrounding areas. The increased coverage by the native plants has led to numerous observations of wildlife utilizing the area. The River Authority continues to manage the area through appropriate herbicides and physical removal of invasive species. 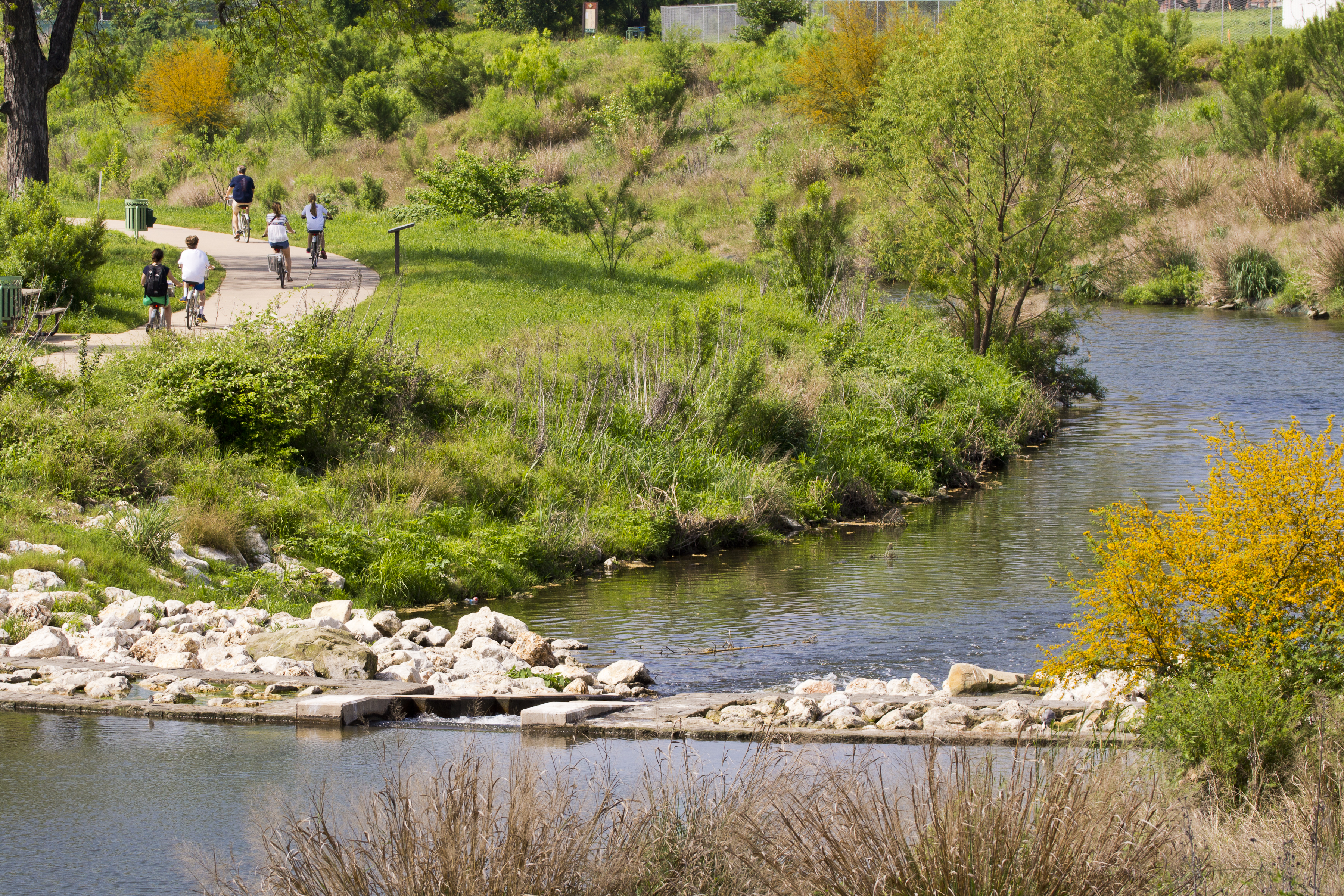 The Mission Reach Ecosystem Restoration and Recreation Project has increased the quality, quantity and diversity of plants and animals (flora and fauna) along the eight miles of the San Antonio River Mission Reach area. The ecosystem restoration process was accomplished by restoring the natural pool, riffle, run sequences; reconnection of two historic river remnants; restoration of natural backwater habitats; and restoration of the native riparian corridor, including the planting of over 20,000 young trees.

The Mission Reach looks much different than the historic San Antonio River Walk and the Museum Reach area of the river north of downtown. The native landscape looks wild rather than manicured. Grasses and wildflowers are allowed to grow to their natural heights rather than mowed. Boat traffic on the river is limited to canoes and kayaks rather than barges. The result is a serene, natural landscape where visitors can enjoy the inherent beauty of the river.

It will take many years for the trees and vegetation to fully mature. So much of the landscape is still in its infancy. It will take approximately 50 years for the entire ecosystem restoration process to be completed.

The Mission Reach project includes the restoration of approximately 334 acres of riparian woodland habitat. This includes the planting of over 20,000 young trees and shrubs, 39 native tree and shrub species and over 60 native grass and wildlife species. The Mission Reach project was designed to mimic the diversity and density of a naturally occurring riparian area that exists during drought and flood conditions. Trees were planted approximately two years after the completion of each phase of the Mission Reach in order to give time for the vegetation and grasses to become established. Just like the Eagleland Segment, it is hard work to maintain these areas while the native plant communities grow and spread. For example, during one week in August 2010, over 3 tons of weeds and weed seeds were hand pulled from the area.

Previous flood control efforts had channelized the Mission Reach and eliminated many of the features that allow for a diverse river ecosystem to thrive, but the SARIP helped to revitalize this incredible aquatic habitat. River restoration was accomplished by restoring natural river features to 113 acres along the river such as riffles, runs, pools, and embayments (oxbow lakes). Each of these elements of the river provide different types of habitat to maintain a diverse and healthy aquatic ecosystem.

The Mission Reach segment consists of Mission Portals that reconnect the river to the four Spanish missions that relied on it hundreds of years ago – Mission Concepcion, Mission San Jose, Mission San Juan and Mission Espada. These connections feature historic and artistic interpretations of the story of the missions and highlight their social and cultural importance to the area. The Mission Reach Project included the portals and restored two sections of the river that historically flowed past the missions in order to reinforce the relationship between the river and the missions. Project planners worked closely with the National Park Service to ensure that there was a seamless transition between the Mission Reach and the San Antonio Missions National Historic Park so visitors could experience the rich history of the area.