The San Antonio River Basin is home to rich and varied cultures. Payaya, Coahiltecan, Karankawa, Lipan Apache and Tonkawa Indians; Spaniards; Mexicans; American settlers from the east; and German, Czech, and Polish immigrants are among the early peoples who shaped and settled the San Antonio River Basin. Plentiful water drew them to the basin, where their various cultures took root and still influence communities, traditions, festivals and events.

The headwaters of the San Antonio River were a gathering place for Native Americans over 12,000 years ago, providing precious water in a semi-arid landscape and attracting game. When the Spanish made an expedition in 1691, they found an encampment of Payaya Indians beside a river they called Yanaguana. Other Coahiltecans, along with Karankawas, Lipan Apache, and Tonkawa hunter-gatherers, led a nomadic life throughout the river basin, gathering mesquite beans, prickly pear fruit, pecans and other wild plants and hunting deer, bison and smaller mammals, as well as taking fish from the river itself. 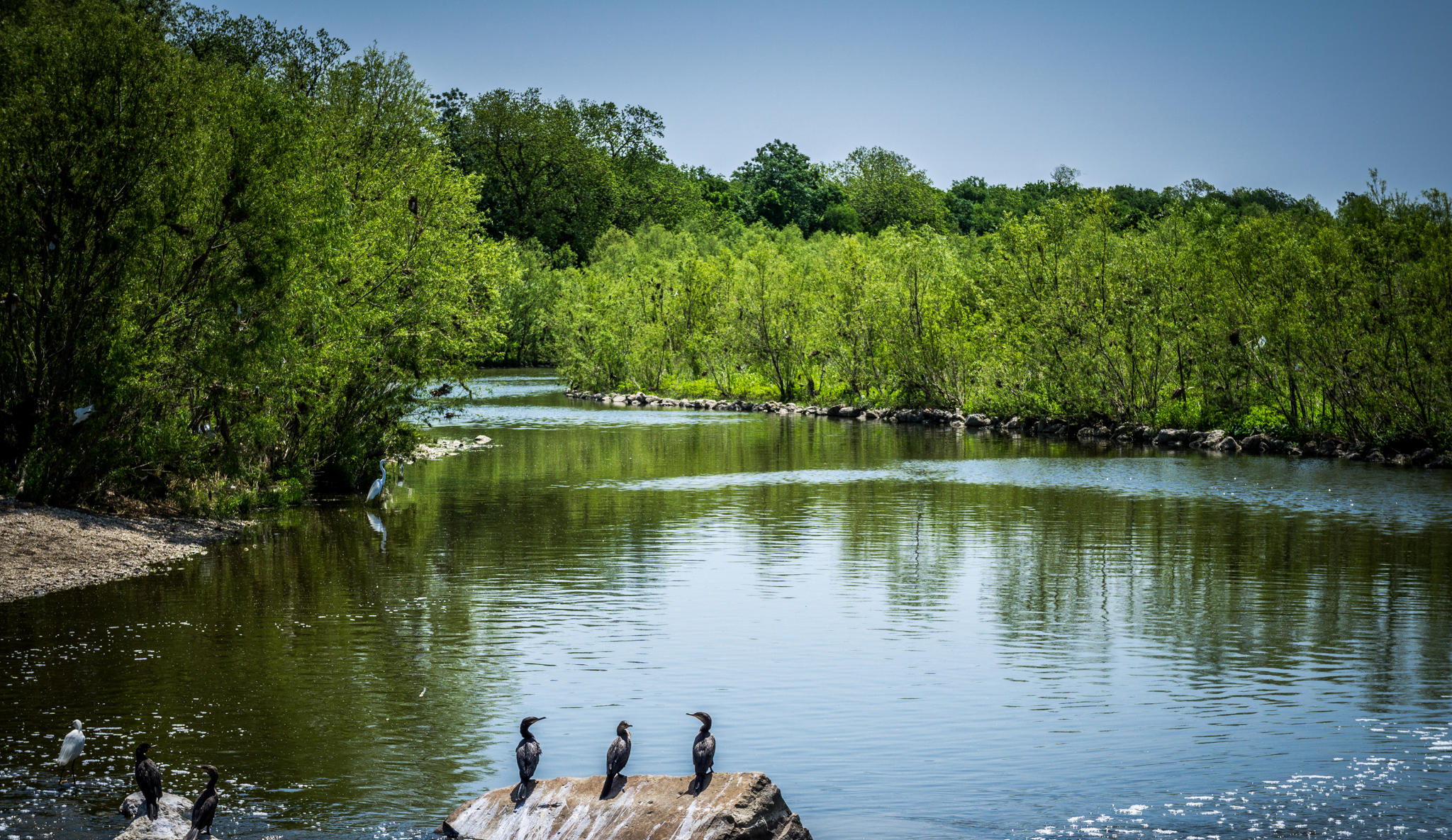 The San Antonio River was also a lifeline for the next wave of human habitation. The Spaniards established presidios (forts), civil settlements and missions along the river in Bexar, Wilson and Goliad counties and associated ranches in Medina, Bexar, Atascosa, Wilson, Karnes and Goliad counties. These ranches provided cattle, horses, goats and sheep to the missions.

The missionaries and their Indian laborers tapped the San Antonio River for irrigation, building a system of acequias that watered corn and bean fields.

Acequias (irrigation ditches) had been in use in the arid parts of Spain since the 8th Century, so Spanish missionaries knew just how to route San Antonio River water into dry fields. The acequia associated with Mission Concepción was said to be large enough to be navigable by small boats! Mission Espada’s acequia system includes a stone aqueduct that is considered the oldest still in use in the United States.

In addition to the river, La Bahia Road, which is the southern section of the great Camino Real or King’s Highway, connected the missions and stretched about 700 miles from Monterey, Mexico to Louisiana. Today, state highways 181 and 239, and farm-to-market roads 887, 2043 and 81 parallel parts of the old road.

Fertile soil, open range, and the San Antonio River continued to attract settlers from Nueva España in the 1700s, followed by settlers coming west from the United States in the early 1800s. German, Czech and Polish immigrants established tight-knit farming communities throughout the area, including the first organized Polish settlement in the United States: Panna Maria in Karnes County. As the 19th Century progressed, so did the river basin. Railroads were built, more settlers arrived and large-scale agricultural production began.

The headwaters of the San Antonio River are in Bexar County, and the River is the reason for the area’s early settlement. Spanish soldiers established a presidio in 1716, making the first civil settlement possible in 1731. From 1718 to 1731, the missionaries established their five compounds and acequias to convert the Indians to Christianity and an agricultural way of life. When the first Anglo-Americans arrived in 1821, the little town of San Antonio de Béxar was home to about 2,000 Mexican colonists and soldiers. In the 1830s the battle for Texas independence from Mexico began, marked by the fall of the Alamo in 1836 and ending with the defeat of Santa Anna at San Jacinto that same year. After Texas became a state in 1845, the number of European and Anglo settlers increased dramatically and the county’s population and economy accelerated. Today, San Antonio is the 7th largest city in the United States and its colorful history, charming River Walk and missions make it a popular tourist destination.

After Mexico won independence from Spain in 1821, the new government began secularizing the missions. Most mission property was distributed to the Indian inhabitants or sold to private parties by 1794. However, Mission Espíritu Santo remained in Franciscan hands until 1830.

When the Spanish established the chain of missions along the upper San Antonio River, they also established ranches to supply cattle, goats, sheep, mules and horses to the missions. Many of those ranches were in the area now known as Wilson County, where ranching is still a major part of the economy. Anglo-American, German and Polish settlers began arriving in the 1850s and an act of the Texas legislature established Wilson County in 1860. After the courthouse burned in 1883, county officials hired the noted architect Alfred Giles to draw up plans for the present-day courthouse in Floresville. Today Wilson County is a leading producer of peanuts and, in the industrial arena, provides oil and gas field services and produces structural clay products and fabricated metal plate work. Tourists visit Jackson Nature Park near Stockdale, the historic Brahan Masonic Lodge in La Vernia, the Dewees Remschel House near Poth [by appointment], the Wilson County Jailhouse Museum in Floresville, the National Park Service’s Rancho de las Cabras and the history exhibit at the Catholic Church in Kosciuszko.

Rancho de las Cabras (Goat Ranch) belonged to Mission Espada. It provided the Franciscan friars and their Indian converts with horses, burros, cattle, sheep, pigs and goats from 1731 to about 1794. Today, all that remains of the Rancho’s stone perimeter wall and chapel are some foundation ruins that can be seen where Picosa Creek flows into the San Antonio River.

In the late 1700s, rich land in this area and the San Antonio River’s reliable water source led to the establishment of big ranchos, which became targets for raiding Comanches. Despite the presence of a fort, Fuerte de Santa Cruz del Cibolo, at Carvajal Crossing on Cibolo Creek, continuing attacks forced the abandonment of many ranches. By the 1850s Indian raids were in the past and Anglo Americans began settling the area, along with Polish immigrants who founded Panna Maria, the oldest Polish settlement in the U.S. Helena became the county seat when Karnes County was established in 1854.

The original courthouse still stands in old Helena, but today Karnes City is the county seat, presiding over a prosperous county with an economy based on ranching, agriculture and, until the early 1990s, uranium mining and processing. Tourists visit the historic churches of Czestochowa, the “painted church” and museum at Panna Maria, Old Helena and the city park and historic bandstand at Runge.

Evidence of Spanish settlement in the Goliad County area is preserved in the beautifully restored Mission Espíritu Santo and, across the San Antonio River, Presidio La Bahía. In the late 18th Century, the Franciscan missionaries converted and “civilized” the native Aranama and other Indians. The Presidio protected the mission and La Bahía Road, a vital trade route. During the Texas Revolution, the Goliad area witnessed history, including the drafting of the Goliad Declaration of Independence in 1835, the surrender of James Fannin’s forces at the Battle of Coleto and the subsequent infamous execution of the Texan prisoners. Goliad County is one of the 23 original counties established by the Republic of Texas in 1836. Today, farming and ranching is important to the county’s economy, and oil and gas production have also become major sources of revenue. The county attracts tourists to Goliad State Park, Mission Espíritu Santo, Presidio La Bahía, the historic Courthouse Square, General Zaragoza’s birthplace, Fannin Battleground State Historic Site and the Berclair Mansion.